My muse abandoned me this week. Left me wordless sitting in Tik Talk Cafe pretending that I was writing this blog.  She hasn’t done that for a while. Disappear that is. I was surprised. She’s usually there, hanging out with Mai and Meriya at the Tik Talk waiting for me and my lap top to arrive. Then, somewhere between my second cup of tea and chicken noodle soup, she does her magic. Drips ideas into my head that I can then massage into words and paragraphs and put down on this blog. But not this week. I waited. One. Two. Three hours. Nothing. She didn’t even leave a note.

I thought maybe I should put signs up in the neighborhood like those lost cats’ signs that I can’t bear to look at — always thinking that the worse has befallen every Bruce and Morris and Fluffy and Blackie.  The trouble with muses, is that they don’t photograph well. 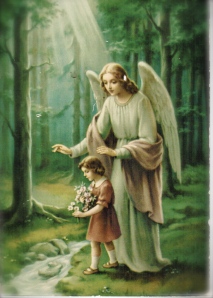 So I’m going to use the next best thing — my guardian angel. She is how I imagine my muse would look. (My friend, Frances, said depression was her creative inspiration when she was young. She would need a drastically different image for her lost muse.)

This is the same picture that was hanging in my first grade classroom at St. James the Less School. I found a postcard of it in Madrid one year and never have been without it since. Guardian angels do their work well — if you believe. I knew from age 5 that this little girl would never accidently trip and fall into that little brook, hitting her head on a stone and perishing for none to find. Oh no, she had her winged guardian angel right there with her. I adopted her right then and there, the angel not the girl, as my best friend and holiest of holies. So what better model for a muse could I pick? But it does seem a wee bit sacriligeous to use my angel — and I’m just superstitious enough not to want to get on her wrong side. I still remember the Red Cast Days too vividly for that!

So I did the next most logical thing to find my lost muse — I Googled where to find lost muses. Among the suggestions were The Mall! The Mall? No muse of mine would be caught living or dead in a mall. I hate shopping and I hate anything that smells of a MALL. I kept looking. Second suggestion — The Bus. Whoever wrote this article has not been on a public bus for a century at least. I’m usually pissed off at over-loud people and the folks who hover over you with scalding cups of coffee which they tip precariously while they’re texting nonsense. There is no inspiration on-a-bus. The Beach. Nice, here I am stuck in Toronto and they suggest a beach! Yeah, that would be great and my errant muse may just be sitting on one right now but can I get there, No, No, No. Going to the fake beach on Lake Ontario Does-not-Count. The Gym. Hmmm, I didn’t get to the gym one day this week. Maybe my muse was there all along with her inspiration mixed in with her persperation just waiting for me to come find her.

No, I know the real reason my muse didn’t show up at the Tik Talk Cafe on Thursday. I didn’t really “show up” to write. Yeah, yeah, yeah, I was there. Yeah, the MacBook was open and ready. But I knew as soon as I got up that morning that any inspiration that she would dribble into my creative mind was going to get lost among the sluggishness from staying up too late the night before, that third glass of wine, my aching body from the return-of-the-Heat-And-Humdity, and that sense of righteousness I felt having worked two days counseling frusrated unemployed. I knew she wouldn’t accept them as reasons enough not to slog through the creative process and get words down. All I can do is hope she comes back from her vacation next week and I’m ready.