This old dog is trying desperately to learn some new tricks. Well, not exactly brand-new-spanking-clean ones — but old familiar ones that I have neglected over the years. I look at it as a revival, a rejuvenation, a breathing of new energy into my life. It’s sort of like my own version of a re-production of a Broadway play — say Cats, for example. The songs are familiar and even the characters but there are subtle changes that make it look the same but different and better this time around. (You know why I had to use that particular play as an example — anything else would have created a pissy chorus from the back of the couch.)

It was definitely time to infuse my days with something more than Lumosity and TV viewing. And it didn’t hurt that I was “encouraged” in a most persuasive way to take on one of these. There is something convincing when a bone surgeon says to you, “You don’t need surgery yet [the operative word here] but you do need to strengthen those legs of yours!” What? Haven’t I been going to aquafit for three years now? Don’t I walk hither and yon on a daily basis? Isn’t climbing up-and-down two flights of stairs 630 times a day enough? Evidently not — at least not for my deteriorating, bone-on-bone knee.

There was nothing to do but have one of those, “Ann, I’m-being-serious!” kind of talks with myself. There were two very convincing sides of this discussion. Side One: “What do you mean you’re going to take money out of your savings to hire a trainer?! So what happens when you’re 80, eh, and you don’t have any money? What are you going to live on then, old lady????” Side Two: “Look, all right, either you take that money out of the bank or you don’t walk. There it is. You make the choice.” Walking sounded much more inviting than mere money — I hired Christina-The-No-BS Trainer. 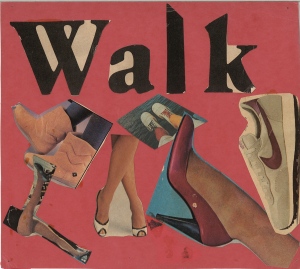 arms and marching feet. I knew this from D.C. when I decided to walk to work in order to save money, get healthy and delay as long as possible opening the door into that law firm at Dupont Circle. But, I knew that in order to do that I needed something to get me out of bed early enough to slip my feet into those lovely tennis shoes and trot down 16th Street — otherwise I’d be back on that dreaded 42 bus. So I created this collage of feet and shoes and Rockette Kicking Legs. It worked three days out of five — except in putrid, humid, yucky Washington summers.

But this was a new regimen calling for a new, inspiring sign to reflect my more “mature,” shall we say, attempt at healthiness. I went next door to visit my personal artist to see what he would recommend. Finn is a remarkable guy and I knew he would take my request seriously and give me something that would get me working with an intensity that even the challenging Christina would approve of.

We consulted. I told him that I would need something to remind me that if I didn’t exercise I wouldn’t be able to stay in my two storey apartment next door. He gave me a look like, “What, Annie? You need a reminder to do that?” But that did not deter his efforts. ARTIST AT WORK was plastered all over his face — DO NOT DISTURB. I kept quiet. He went straight for the red marker — he knows that’s my favorite color. 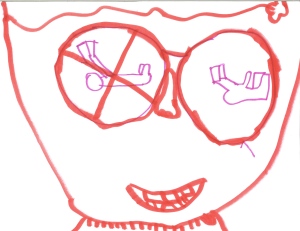 Sweet! I really love how this kid respects my tastes. I watched and waited. When he was satisfied,
he did a sort of Ta-Dum and revealed his creation. He thought I could use an explanation. “Annie, you can’t just watch exercises!” — that’s the crossed out lens of my red glasses — “you have to DO THEM!” He followed this up by demonstrating one-handed pushups on the floor. I demurred from joining him which I think he interpreted as a first-step to failure of my whole exercise program. I hung the drawing on the kitchen cupboard door where I could see it when I sat in my chair pumping arms and marching my little heart out. It’s worked so far.

Oh, my other “new trick” is trying to improve my Spanish. I decided after 40 years of my tired, small vocabulary and incorrect verb tenses that it was time to Hablo Mejor! — also I have a Mexican wedding to go to in June and I swear I’m not going to sit there and not be able to have conversations in Spanish with the folks. Finn doesn’t speak Spanish yet so I couldn’t ask for a sign to get me to study those irregular verbs and do my homework. But that kid is good — he gave me the kind of encouragement I needed without lifting a marker. There he was on the sidewalk a half a block in front of me. I watched his little back as he seriously and steadily took in his mom’s lessons on How To Ride Your Bike Safely. It was inspiring! If Finn can go from his wobbly ride of a week ago to this steadiness — then I can learn all those past tenses in Spanish! I’ll probably be a lot slower and not as successful but I always have this little guy’s picture to tell me not ever to give up trying! 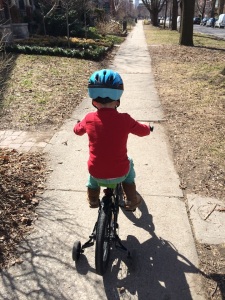 2 thoughts on “A BIG Help from My Little Friend…”