I’m in the throw-out mode once again. For weeks, as I’ve been doing my exercises, my eyes have focused on the dust-encrusted bottom two shelves of my big, black bookcase. There’s stuff there that I haven’t peeked at for years. I have wondered what it was and why the hell I was keeping it, but I’ve never done anything to get it out of here — or at least dust it off. Besides these I have boxes of letters and cards and photos that have been aging on the shelf in the closet. These are even older and more neglected since they have lived behind a  closed door that allowed me to conveniently forget that they were even there. But, really, it’s time to do something about all this stuff. In all the literature I’ve read about aging and getting your “affairs” in order, there is a section on “Not Leaving Your Stuff Behind For Others To Have Go Through.” Actually, I think they, whoever they turn out to be, would have an easier time of it. They could just dump the whole shebang. I can’t do that. I have to go through it bit by bit and make all those difficult decisions.

I decided to start small. I found a packet of “love letters” that I got from Señor C. 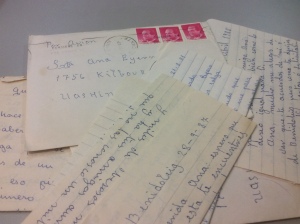 I’d known him since I first moved into Casa Ana with the Ex-Ex. He lived up the street, alone in his big house after his wife died. In those days, he’d offer me apricots and tangerines from his trees and water from his well when the pumps stopped working. It was all neighbourly. But, after I left the town and Spain and the relationship, and went back for my summer vacations, he decided that since I was single and he was single, he would make his move. It didn’t matter that he was 30 years older than me, he was land rich so a good catch for any girl. I never went out on a date with him or did or said anything other than a “Bon Dia” when I passed his house to go to the market, but that must have been enough to ignite his passion and imagination because when I returned to DC, he started writing me letters praising my beauty and intelligence and vowing everlasting love. Since I was thousands of miles away, it seemed harmless, until I went back to the village. Eventually, I had to tell him that I wasn’t going to be marrying him or any one else in the village for that matter. He was very hurt. When I returned to DC that year, the letters stopped coming.

So, why keep them now? Señor C’s story fits in with all of my

other memories of that time in Spain. Those don’t have any written words or photos to remind me what happened, but the memories are still there. I know, no matter what, that Señor C’s and those memories will always be with me. Well, I guess if I get to the point where I don’t remember anything that happened in my life, all the Spain memories will drop away just like all the other life one.

I did read all the letters one more time before I tore them up. Ah, those were sweet words he wrote, but, they can go now.