Since the events of this week, namely the US Election, do not lend themselves to light-hearted posts, I’m presenting here a piece I wrote many years ago and a version of which I “performed” in 2002 on CBC radio’s “First Person Singular.” Its spirit and sense of fun and family remind me what is important to me in these dark days.

Invisibility has always been as problem for me — that is, my apparent invisibility to other people. I am one of those women who can be sitting in an office and have someone walk in and say, “Oh, no one’s here.” In stores, clerks will reach over me to help the person behind.

This isn’t a new phenomenon. I wasn’t much noticed when I was growing up — at least that’s what I thought. Being the tenth of twelve children and a girl and born on Christmas Eve, I felt like I was fading from the beginning. On top of that, I was never the cutest or smartest and, definitely, not the sweetest of my siblings or my classmates.

I would hide sometimes at suppertime or when it was time to go to Mass and wait to see if my mother noticed. I could almost time her counting of heads as she went through the whole litany of our saintly names until she got to her missing chick. “KatyFritzNIckMaryNancyMIkeSteveJoeSusieTommyPeggy — Annie where are you?” I spent a lot of time inside my invisibility, both enjoying the privacy of it and wondering what I could do to get the world to notice me.

I found my answer, or I thought I had, one night while watching Your Hit Parade, that schmaltzy, wonderful 1950s show that presented the week’s hits in skits and drama. I loved it. They called it “your” hit parade and I took immediate possession of every tune and skit like they were chocolate Necchos to be saved and savoured later when everyone else’s candy was gone. Snooki Lanson, Gisele MacKenzie, Russell Arms, Dorothy Collins, what great names! These singers peopled my imagination and became the invisible dates for my paper dolls.

But for all the fantasy, I knew somewhere deep in my working class heart that stardom was not going to be my entrance into visibility. No, I found my escape from

The Hit Paraders definitely did not look like this. My sister, Nancy sent this to me when I started hoofing.

invisibility one night while watching those long-legged, ooh-ahhing singers and dancers who twirled around Snooky and Russell and echoed the plaintive words of the girl singers. Yes, I wanted to be a Hit Parader. I would have discrete visibility and tap shoes.

After I had chosen my career goal, I started to watch the show closer, and, when I was alone,  practice some of my favourite numbers, like the twirling umbrella to introduce, “Hit Parade Tune Number Five, Walking in The Rain.” And, of course, the all-important weekly closing when the girls would sit on the floor at the feet of the stars and move their arms and torsos up and down in time to So Long For a While. Yes, this was surely my ticket to visibility.

One week, after we’d all watched the show, I announced to my family that I was going to be a Hit Parader when I was older. There were a few chuckles and, then, without hesitation, my father said, “No daughter of mine is going to wear those short skirts in public.” I was devastated. At age six, my future was gone, gone, gone. I had made no contingency plans. Your Hit Parade was never mine again.

I carried that disappointment around for years and would tell the story often to friends and cab drivers alike. Then, around my 40th birthday, when I was once again telling my sad-but-true story, a friend said to me, “So, why don’t you just take tap lessons?” What a thought! I had never considered that before. She knew an old hoofer, Jimmy Mack, who was giving soft shoe tap classes starting the following Saturday. It was meant to be. I gave myself the lessons as a 40th Birthday Present — along with driving lessons and sessions with a gorgeous acupuncturist to stop smoking.

The tap studio was a fourth-floor walkup in an old building marked for demolition in downtown Washington, DC. It was perfect to this fledgling Hit Parader. Jimmy Mack was a pro with a toupee and a silver-topped cane he used to tap out the beat for us novices. He had learned the soft-shoe while working with Gene Kelly during the Second World War when they were both assigned to the War College to entertain the troops — or so he told us. 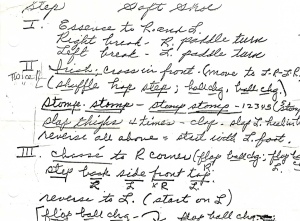 An excerpt of Jimmy Mack’s instructions for the soft shoe

ducks. There were aspiring actors who needed a little tap for an audition, young black kids who wanted to professionalize their street-dancing, Audrey Prior, a 60-something chain-smoking secretary who grew up in New York hanging out in bars with jazz greats, and me who still wanted visibility. It was all wonderful. I would go home afterwards and scare the cats and alienate the downstairs neighbour with my sweeping gestures and tap-shoeing the length of my apartment.

Then Jimmy Mack retired and another instructor came in who moved us on to Fred and Ginger steps and our first recital. Later, I got my fifteen minutes of visibility, sort of, when I, along with thousands of others, tapped ourselves into the Guinness Book of World Records by being the largest group tapping the same routine at the same

time in front of Macy’s at Harold Square. A group in Tokyo broke our record the year after.

They tore down the building where the studio was and I never tapped again. I saved my tap shoes and moved them with me to Toronto. They seemed to have shrunk, and my arthritic knees no longer allowed any serious consideration of taking up tap again. But, I kept the shoes, squeezed them on every once in a while just to hear that wonderful jingle of the tap as it hits the floor.

As for the invisibility, it still slips in now and then. But my stint as a late-blooming hoofer taught me that taps shoes, like ruby slippers, are magic. They didn’t make other people see me better, but, when I stepped into them and clicked my heels, I looked at myself in a new way. And the amazing thing? I liked what I saw.

That’s me in the back row on the right. How did the guys get front row?