I dream lists. I wake up thinking about lists. I write and rewrite then lose the list I just made and have to start all over again. Some of these have become as intricate as a very detailed, very long, very complicated sentence that needs diagramming. I actually loved diagramming. It was one of the things I could get my head around. It was clean, neat and I usually got it right which may be the real reason I liked it. But back to my lists. Does everyone produce a mound of scrap paper with little scratchings of words on them when planning any event? I can’t do it without them. Maybe I do it because it makes me feel like I’m accomplishing something, anything towards the final event.

This particular event is the “christening” of a wee cookbook. After I wrote Mediterranean Journey: A Young Woman’s Travels Through 1970s Europe,  some of my readers asked for the recipes for the dishes I wrote about. So a year ago, in the summer, my friend Clara and I started cooking some of the recipes from the cookbook I used during that travel. It was perfect timing. I was getting ready for knee surgery in September so it gave me time away from worrying and Clara was in between jobs, which was great because she’s an excellent cook and the best person to work with. Every week we’d meet in my little hot kitchen and pick another country and another dish. My neighbour and very good 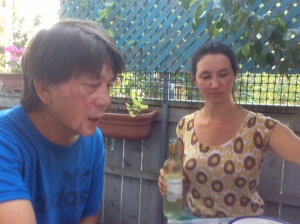 friend, Len, was also off work so he “volunteered” to be our “Excellent Taster.” The “tasting” took place on the front porch and was always accompanied by wine. Not a shabby way to spend a summer, indeed.

Then I had surgery on Harriet-The-Knee and went into rehab, Clara got a very demanding job running an urban garden and Len went back to work. People would ask me, “Hey, Ann, when’s the cookbook coming out.” I’d just say, “It’s in the works.” But it wasn’t really. Finally, I said I had to either do it or chuck it. Being a Capricorn, chucking wasn’t part of the deal, so Clara and I got together and picked the recipes and I started writing stories and doing what else I had to do to make it a wee cookbook.

Which brings me back to these lists. Sunday over 40 people are supposed to show up at my house for the official presentation to the world of From Grah to Paella: Recipes

from My Mediterranean Journey. We didn’t call it a launch since it’s a wee cookbook and launch is such a big word and implies so much.

Now, I am my mother’s daughter, and I know that you cannot invite a bunch of people over and not have food for them. And, it can’t be just chips-and-dips when you’re introducing a cookbook, eh? So, Clara and I decided to cook some of the recipes so people can get a taste of what’s in the book and, hopefully, buy it. After we had the dishes, Clara made an exhaustive (or so I thought) list of what we had to buy. Since she’s finishing up her first semester of graduate school and had papers out the kazoo to write and I had time since the cookbook was finished plus I lived within spitting distance (not actually but close) to Kensington Market and a super market, the shopping was left to me.

I started with that initial list and then subdivided it into smaller lists depending on the area where I had to go to get the stuff. Then those lists were either misplaced or unreadable, so I had to make more. And, that, basically is what I’ve been doing all

week. I just made lists and more lists and more lists. And now, here I am two days before the “christening” with a whole lot of stuff to do. So, right now, this very minute I’m taking yet another list and heading out hither and yon and won’t come back until everything is crossed off.

*****  If you’re interested in getting a copy of From Grah to Paella: Recipes from My Mediterranean Journey, you can order it directly from me (no Amazon on this one). The cost is a mere $10 plus shipping. Or, for a perfect holiday gift, you could combine the cookbook with Mediterranean Journey for $20 — a savings of $5. You can pay by PayPal, cheque or money order. Just send me an email at the link above, and I’ll give you information as to where to send the payment and then I’ll send you the book — just like in the old days.