I am at the beck-and-call of cats today. Sure, I am usually at the b&c of cats but today it is particularly pronounced since I have a third cat that has joined the chorus. First thing this morning, I had Mr. Nick telling me off for doing something that I had no idea what it was which just frustrated him more and brought on a fresh tirade about my 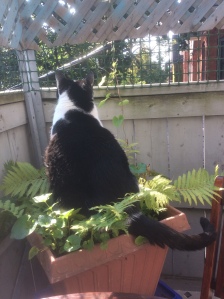 inadequacies. Maybe he was upset because I decided to have my breakfast on the porch, interrupting his constant watch for a particularly slow bird or butterfly — none which materialized. (A damn squirrel did shimmy down from the railing to the floor in front of both undisturbed and bored cats.) As I set the table and started in on my porridge, he turned his back on me and settled in the pot of ferns and stopped speaking to me entirely. Which was fine with me.

Now, I’m over here with Mr. B, that lovely male ginger cat I take care of on occasion. He and I are spending a couple of weeks together while his owner treks her way through Arizona and all the wonderful places that that state holds. I think both of us, Mr. B and myself, would rather be with her then here in Toronto. But we’re not so we’re hanging together.

Mr. B is an indoor/outdoor cat, much more handsome than those gawd-awful carpets they used to sell for patios. All the other times I have taken care of him, I kept him prisoner in the house. My friend, J, would shake her head sadly when I told her that. She’d preach to me that when cats, especially male cats, are used to going outside they need to go outside. And it is cruel punishment, indeed, to keep them in. This last time she punctuated her sermon by saying sternly, “You would never take care of my cats!” It made me feel bad until I remembered that she doesn’t have any cats at the moment. (I almost typed “own” in there but everyone knows you never, ever own cats.)

It makes me very nervous to let Mr. B out. He’s not my cat, for one thing. Wonder if he gets hurt or run over by a car or doesn’t come back? What do I do then? I have never let my cats roam the neighbourhood. In DC, it seemed like the only choice since that neighbourhood was a little sketchy and I wasn’t sure what someone might do with a couple of black cats roaming around. And, I couldn’t envision myself walking around at midnight saying, “Here kitty, kitty, kitty,” when my girl cats decided to cross over to the wild side with some Tom, Dick or Harry and not come home at all. And then there was the flea problem. Once a neighbour, who nobly fed all the stray cats (those Toms, Dicks and Harrys) from her back porch, graciously said she’d come down and feed Millie and Dexie when I went to Spain. When I got back, three weeks later, the entire apartment was hopping with fleas she had carried in as an extra treat for the cats. No, I thought it was better that they never know the freedom of the wilds

But Mr. B is having none of that. On my visit yesterday, he paced back and forth from wherever I was to the back door trying to give me direct instructions of what I was supposed to do. His cries got more and more pitiful as he got more and more impatient 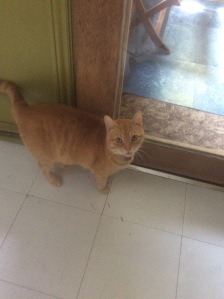 Mr. B plaintively asking for that blasted door to be opened

with my inability to understand. So, to make his point clearer, he nipped my ankle as I climbed the stairs in the opposite direction from the back door. He must have thought I was ridiculously dense not to get the message.

When I got home I called J for advice. “You have to let him out!,” was all she said. Then I emailed his owner, probably, at that very moment, climbing down the miles to the bottom of the Canyon, ogling the scenery and not really wanting to think about her cat who was entrusted to me, the Excellent Cat Sitter. She wrote back, “I’m confident the two of you will work it out.”

So, today, I packed up the laptop and lunch and headed over here to Mr. B’s house for a couple of hours. When he met me at the front door, I said, “Ok, man, this is the day! You’re going out.” He was right there, ready, when I opened the back door. He reminded me of those films about prisoners leaving jail with their little plastic bags of belongings and a ticket for the bus. I swear he was smiling as he started his rounds. I came back inside to work and within five minutes, I heard his little neck bell jingling at the door. I let him in. Five minutes later, he was back at the door crying like he had never been let out five minutes before. This went on at least three times more. Each time, I’d get up and let him out, and each time he’d be gone a little longer than the last, but, eventually he’d be back and I’d get up and let him in again. Finally,  I took the laptop out to the table in the garden to save him the trip.

Mr. B watched me get settled, then rolled around in the grass a bit and then disappeared probably off marking his territory and checking in with his pals in the neighbourhood. I came back in to get a cup of tea and finish this blog. About an hour later, I heard his bell at the door and dutifully got up to let him in. Treats were demanded and given. He had trained me well. Now, he’s hanging out with me letting out not-so-awful plaintive cries. I guess, as his owner suggested, he and I have worked this out — well, at least for today.