Harvey, Harv for short, was to be the name of the newest piece of metal to be inserted into my body. However, pre-procedure, a friend of mine commented that it was strange that I would put a feminine name in my knee and a masculine name in my heart. What message was that communicating? She was right, there was no room for a Harvey in my heart, especially right now when most people associate that name with a creepy

Hollywood promoter and not the six-foot white rabbit that followed Jimmy Stewart around in the movie of the same name.

I thought it important that I have a name in place before I went over to the hospital on Tuesday to have the pacemaker implanted. So I did a search of women’s names that started with “HA.” I wanted my heart name to go nicely with Harriet, who’s been residing in my knee for almost three years now. One doesn’t want a clash of syllables when calling forth your replacement parts. There weren’t really a lot of names that said something to me. Names that gave me strength and courage and a little no-nonsense attitude that I like to think Harriet and I have about all this aging stuff. Then I saw Hazel. I forget about a name like Hazel. It’s old fashioned and not used all that much these days. But it does have a “z” right there in the middle. I seem to remember that having a zed/zee in your name is some kind of special. And, upon further research — ok, Wikipedia — I found out the Celts believed the fruit of a Hazel gave one wisdom and inspiration. I could always use more of that in my little heart. And, according to the Brothers Grimm, I should now have protection from snakes and other things that creep on the earth — perhaps like that Harvey guy.

So, on Tuesday morning, Harriet and I — accompanied by good friend, Merrill — made our way over to the hospital to pick up Hazel. I told myself that I was not nervous, no, this was not going to be another Harriet. Everyone, and Google, had told me it was an easy procedure. Just a little slit under your collar bone to hold Hazel, a few wires weaved through your veins into your heart and twenty minutes later you’re finished.  I shouldn’t have listened to anyone.

It all started when they couldn’t find a vein to put the IV in my arm. They poked and prodded and did everything but conjure up a vein to appear on my arm. Finally they packed my arms in warm blankets in the hope that that would bring out those babies. I was starting to get more than a tad concerned. That IV was going to carry antibiotics and DRUGS. I was not going to do this without either of those. Finally, they got one going in 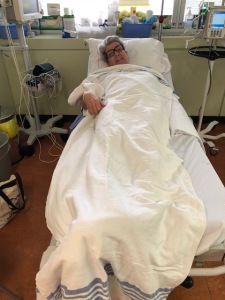 one arm and decided enough was enough. Then I waited.

Merrill and I laughed at how ridiculous I looked packed in warm blankets waiting for the 12-year old surgeon — ok, they all look 12 to me — to arrive to do the deed. When he did and introduced himself to me, I told him I had Googled him. He was not amused. He was even less amused when I told him I had been singing, “Be Careful It’s my Heart,” and started to sing it to him. It was unfortunate to have a doctor with no sense of humour. Actually, that was the last time I smiled for a while.

Finally, they wheeled me into the operating room as I blew kisses to Merrill. It was all new and shiny with monitors over the table and an x-ray machine hanging from the top. When they shifted me over to the cold, too-narrow operating table — I wonder how obese people fit there — I started to get a tad nervous. But, genuine fear erupted when they built a little tent over my head so I couldn’t see anything. I did not like this one bit. I am more than a little claustrophobic.

During the procedure, as my tears came, one nurse or another would poke her face in the hole on the side and pat my head and tell me, “Not to worry. Everything will be fine.” I suggested that each of them should have to have this done to them and then they could tell me that and for heaven’s sake give me more drugs. But as the hour wore on, it got worse. Whoever said this was a light, no-pain procedure definitely had better drugs and more of them than I was getting in that super-duper, state-of-the-art operating room. It hurt and it hurt a lot. I’d cry out, “Ouch! What are you doing up there?” and he’d answer something that made me cringe down below in my tent. Eventually, he found veins that would take the leads into the heart. (He noted that if I had been a stevedore then my veins would be bigger and he wouldn’t have had so many problems getting those wires into my heart. Curses on my life in offices.) But eventually, Hazel was in place with the wires hooked up and helping my heart to beat.

I wonder if this will be like childbirth where women say they forget the pain afterwards. I’m just going to welcome Hazel and tell her how much I love having her there in my chest keeping the rhythm of my heart — and my life — going.