Since September, I feel like I’ve been climbing a steep, obstacle-strewn craggy mountain weighed down with all the sadness, and hurt, and, most of all, fear that the news that I had to move caused me. But after so many shedded tears it’s now, finally, moving day. There’s a part of me, deep inside that is excited about this prospect of a new place in a new neighbourhood. But right now, surrounded by boxes and bags and too much stuff to

fit into a much smaller space, I’m just anxious and worried that it won’t all fit or that the couch won’t go in the elevator or into the apartment after they carry it up three floors. But, I guess that’s the movers concern, not mine. If it’s left on the kerbstone for someone else to claim, that would be fine too.

My biggest concern right now are two very nervous black-and-white cats. All week as boxes added up and hiding places disappeared, they’ve been worried. Today, I know that they know something is up. Cats are anything but dumb. They can smell the anxiousness and sadness that I’m exuding all over the place. So they’ve decided that the best strategy is to never let me out of their sight. If one has to use the litter box, the other is right beside me. Most of the time, the two of them sit staring at me like I might disappear at any moment leaving them behind, just forgetting them. It’s hard to forget a 15+ pound Nick and a very vocal Ms. Rose. But they’re taking no chances.

I have a plan that in theory would cause them the least amount of discomfort. At ten o’clock Renaldo, who they adore, will arrive no doubt with Temptations in hand to ease 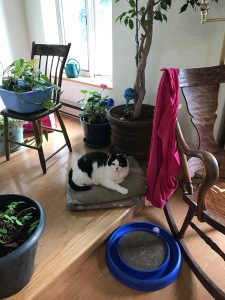 rose camped out among the other living things that have to be moved.

their pain. Then Steven, another favourite “uncle” will be here to coax them sweetly into cases and then whisk them, food, cat-nipped toys and Rescue Remedied water up to the new place to hang out in the bathroom until the movers have come and gone and it’s only a few of us left. Then they can come out and explore their new place. I’ve told them all about it — especially the fact that there are not 13 stairs straight up to get to their litter box and my bed to sleep on.

Today, I told them the story of Millie and Dex who came all the way from Washington, DC in a crate in the back of the car with only a few drugs to ease their fear. Those two little cats had to move into a whole new house, country, and group of people and they made it ok. So just moving up the hill shouldn’t so bad. Rose and Nick did not buy that argument. Their

counter argument was if it’s not so bad than why have I been crying all the tears over the past week. But it will be. I know it will be. We just got to get through today…and tomorrow…and the next day and it will be. As I told Rose and Nick, as long as the three of us are together we are home even with too much stuff in too little space.