It was time — no, it was past time — for me to leave all that fear and shyness I had about my writing, along with those horrible, nagging self-doubt feelings of “Oh my, is Mediterranean Journey really, really good enough to put out there in the public?” Even — or should I say especially — the cats were getting bored by all that negativity around this house. It got to be that anytime I started to whisper doubts about my abilities, they’d plunk themselves off the sofa and go in search of somewhere — anywhere — to get away from my whining. They knew it was time for me to believe in these stories and so did I!

We, the cats and I, figured, the best way to announce this was to throw a big Launch/Celebration to show-off Mediterranean Journey! Once that decision was made and the invitations had gone out, there was no turning back. I swear I heard the Alleluia Chorus coming

from the couch, but I could be wrong.

It took a lot help from a lot of friends to pull this off. First to come was My Oldest-Friend (not age — but longevity) in Toronto — the Amazing Chef, Lynda. She arrived at 11 a.m. for the 3 p.m. launch. She is one of the most spectacular, passionate and organized cooks I have ever met. She 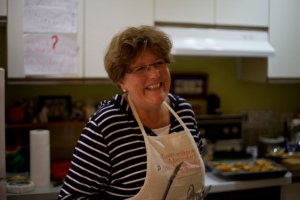 loves food and putting food together…and she loves me too! She had done the food for my first launch, too. But I was particularly touched by her efforts for the launch this time since she is a vegan and was cooking lots of non-vegan dishes. We two had decided to fix something from each of the countries in the book — dolmades and spanakopita from Greece, bruschetta and raviolis from Italy, tortilla and olives from Spain, sardine dip for Yugoslavia (I ate a lot of sardines there), cheese for France, and Morrocan Cigars for Morroco, of course. It was all fabulous. 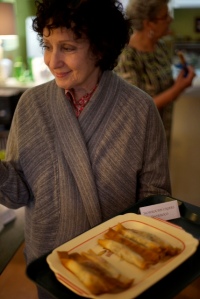 Judith passing around Moroccan Cigars — me in the background eating one!

Then came Back-up Help: Exceptional Friend and Yoga Teacher, Judith, Social-Media-Guru Sarah with dozens of chocolate chip cookies, Robyn with her kick-ass camera to take pictures, and Rebekah, the only teenager there, who has been around my life even before she was born. She brought brownies and teeny tiny cupcakes and a willingness to do whatever we asked her to do. And, Lennie, of course, who has had my back since I walked into this apartment nineteen years ago.

Rebekah serving the raviolis — she took her job very seriously

Some of the wonderful folks who were there.

It was an eclectic crowd. The Intrepid Editor was there, The Tik Talk Cafe folks, neighbors, old friends, the designers of this beautiful book, my gardener-handyman-friend, cat-sitting customers, my Wednesday-Spanish-Speaking buddy, fellow splish-splashers from Aquafit, former clients who I haven’t seen in many, many years, and sweet Finnie from next door who brought me a bouquet. The cats, of course, did not attend. When the doorbell buzzed for the first time they disappeared — Nick to hide under the covers (he thinks we can’t see him) and Rose, more strategic in her hiding places, scurried herself as far back in the closest as she could get. And there they stayed.

Sarah reminded me, and everyone else there, that this was a Book Launch and there

were books to be sold and signed! So I tucked myself into a 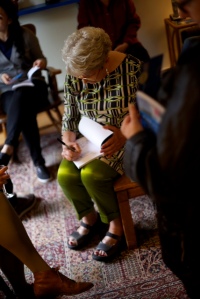 spot and signed books.  I felt then that  I had finally accepted that Mediterranean Journey: A Young Woman’s Travels Through 1970s Europe was indeed a good book and worthy of a read…and it is!

The cats stayed hidden until the only folks left here were Len and Renaldo. Rose and Nick knew for a fact that if they came downstairs, those two would immediately go out to the kitchen and get the bag of Temptations out of the drawer. They were not disappointed.

They deserved those treats!

More Photos from The Launch:

Talking with Abdullah, a long-time ago client, and Andy and Ramiro who had been given orders by their wives, Sonam and Hilda, to be here — or else — since they couldn’t come.

Irene giving me advice on what to write!